tan  Tanzan Noh is a project which took place in 2011 to 2016, aiming to reinterpret the significance of Noh in modern society through organizing the dedication of Noh performances at Tanzan Shrine(談山神社, former Myoraku Temple[妙楽寺]) in Tonomine(多武峰), Nara. The project started in 2011 with the dedication of Noh piece « Okina », and including this, has presented a total of 6 Noh performances.

The city of Sakurai is known as the place of beginning for various ancient cultures of Japan, being the founding place for Sumo, the location of the very first national theatre, and where the first waka poetry in Manyoshu(万葉集, the oldest existing poetry collection in Japan) was created. The highlands of Tonomine situate within this city, and they too were the origin of Noh theatre. During the Muromachi period(室町時代,c.14-16th century), in which Kan’ami and Zeami perfected the art of Noh theatre, it was the duty of the Yamato Sarugaku Yonza(大和猿楽四座, 4 Troupes of Yamato Sarugaku[Form of performing arts from which Noh and Kyogen derived], are the 4 troupes that are origin to the 4 extant Noh schools, Kanze, Hosho, Komparu, and Kongo) to make a performance offering each year 500m up in the mountains in Tonomine, amidst the abundant nature. According to records, there they established particular styles of performance such as Gusoku Noh, where they used actual horses and armours, and competed amongst troupes by each performing newly written Noh pieces. We could easily imagine its importance to the Sarugaku performers of the time from the fact that the negligence of this trip to Tonomine resulted in as serious a consequence as the banishment from the troupe. 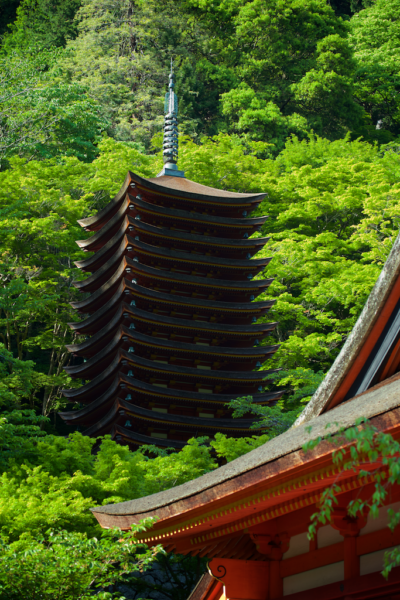 However, this pilgrimage to Tonomine was discontinued sometime in the mid 16th century. In the Meiji period, the link between Tonomine and Noh theatre became furthermore forgotten due to the rising expulsion of Buddhism. Shintoism and Buddhism had been syncretized ever since the medieval era in Tonomine, and it was at this time that the Myoraku Temple was eradicated and was renamed to become the “Tanzan Shrine” of today. The annual dedication of Noh performances at Shunie(修二会) of Kofuku Temple and at Kasuga Wakamiya Festival(春日若宮おん祭) remains to the date, but the pilgrimage to Tonomine, which along with the two former events once counted itself amongst the three obligations of the Yamato Sarugaku, is now almost completely forgotten.

Despite such oblivion, the visit of Takeshi Umehara to the Tanzan shrine and his encounter with the okina(翁, old man) mask “Matara Jin Men(摩多羅神面, Matara God Mask)” under the guidance of priest Chihiro Nagaoka gave momentum to reestablish the relationship between Noh and Tonomine. Thus on the 16th of May 2011, celebrating the long awaited completion of the renovation of the Tanzan Shrine Gonden(権殿, substitute hall to the main hall formerly called Jogyodo[常行堂]), the dedicational Noh performance of « Okina » using the Matara Jin Men was realized by the 26th head of the Kanze school, Kiyokazu Kanze. 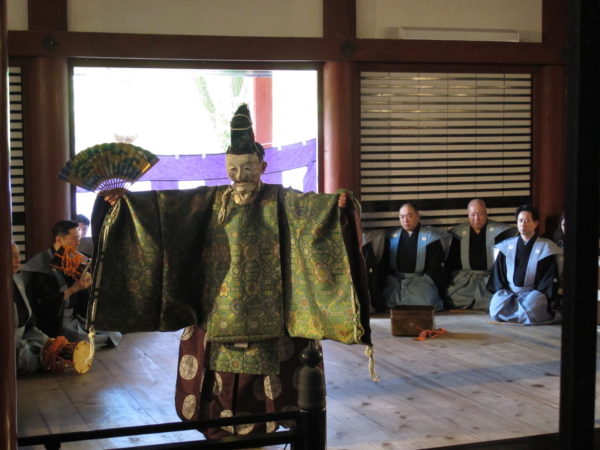 Matara Jin Men is a larger than average okina mask, and “Matara Jin” is a hidden god shrouded in mystery to which is thought to have a strong connection to the creation of the Noh « Okina ». “Matara Jin Men” used to be enshrined within the Gonden, in a space called “Ushirodo(後戸, literary back door)”, where Buddhist priests offered various performing arts in dedication to the god. This may have been where « Okina », the most important Noh number which prays for the “peace of the world and the country(天下泰平, 国土安穏)” and celebrates the “fertility of soil(五穀豊穣)”, referred to as being “Noh and yet not Noh”, was created. The votive performance of « Okina » by the head of Kanze school taking place in Gonden was therefore a historical event in itself. 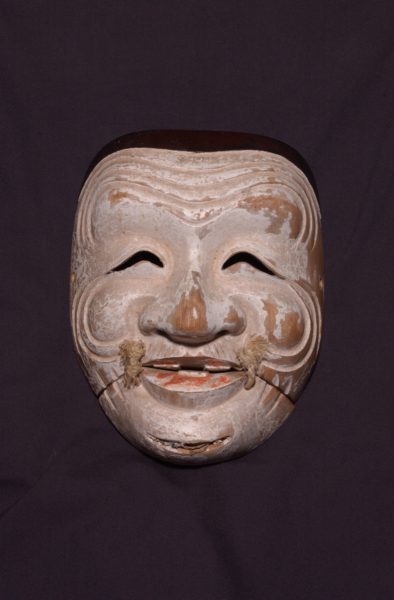 Following this first performance, the Tonomine Tanzan Noh Executive Committee was set up to arrange consecutive Noh dedications at the Tanzan Shrine, and the Tanzan Noh project was officially launched in 2012 as a five-year plan. Eminent Noh performers gathered from all over Japan each year, and took part in offering Noh performances using Noh masks owned by the shrine, among which was the « Okina » dedication using Matara Jin Men, supervised by Kiyokazu Kanze. The 20th head of Hosho school, Kazufusa Hosho, joined the project in 2015, and in 2016, to mark the end of the project, « Sanbaso(三番叟) » was dedicated using the shrine’s “Kokushikijo(黒式尉)” mask and following the « Okina Hoenoshiki(翁法会之式) », believed to be the performance method that used to be employed at Tonomine.

Other than votive performances, there have been two symposiums, in which the significance of Tonomine in Noh theatre has been discussed along with subjects such as the more general position of Noh and “Okina” in Japanese culture. Through these discussions, we rediscovered the fact that locations related to Noh, such as Yusaki(結崎) and Toyama(外山), where the Kanze and Hosho troupe respectively located their theatre, all existed alongside the Tera river(寺川, literary temple river), and that its source was in Tonomine. This discovery opened an entirely new range of perspective that rereads the history of not only Noh theatre, but of the entire Yamato history, which is now called “Terakawa Culture Studies”.

The year 2013 marked the 650th anniversary of the birth of Zeami and the 680th for Kan’ami, and in this year we carried out an oversea performance in northern France, in an old castle in Bruyères-sur-Fère, using Noh masks from Tanzan Shrine. The village is known to be the birthplace of French playwright and diplomat Paul Claudel, who is known to have had an acute insight into the very nature of Noh, and defined Noh to be “someone who arrives”.

In May 2015, the “Tanzan Noh” project also took place at the National Noh Theatre, again using masks from the Tanzan Shrine.

This website will share records of these votive Noh performances and various related events which took place from 2011 to 2016.

This productive six-year project would not have been possible without the wholehearted support of Mr. Seichi Kato, the former chairman of Okasan Securities Co., Ltd. Mr. Kato has to our sincere regret passed away on the 19th of January, 2016, at the age of 87, but we hereby express our deepest gratitude for the years of support for the project and pray for the peace of his soul.

It is our utmost hope that these records will reach many and that it shall provide us with an opportunity to reexamine the origin of Noh and all performing arts.